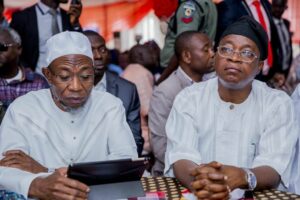 Osun ex-Governor, Rauf Aregbesola has described Governor Adegboyega Oyetola as a worthy successor who has weathered the storm of governance effectively.

Aregbesola disclosed this in a congratulatory letter he sent to the Governor in commemoration of Oyetola’s second anniversary, which was obtained by Vanguard correspondent in Osogbo on Friday.

The letter with reference RARE/PM/S. 173 addressed to the Governor stated that Oyetola has navigated the challenges of his second year in office to his admiration.

It reads further, “I write to congratulate you on the second anniversary of your administration.

“I look back with pride and nostalgia the hard-fought battle of your election and the continuation of progressive administration in the State of Osun.

“There have been challenges along the line – the inclement national financial weather, the COVID-19 pandemic and others not so significant. But you have weathered the storm admirably and steadied the ship of state.

“The challenges will no doubt present a new format as you step into the third year. These are heightened political participation, pressure to deliver more dividends of democracy and increased demands from the political system. I have no doubt that you will cope nicely.

“Please continue to make the welfare of the people your biggest concern. They are the reason of state. Without them there will be no government or any political office to occupy.

“Once again, congratulations, as I wish you a resounding success in office and every aspect of life.

“My kind regards to the good wife, Alhaja Kafayat Oyetola and the entire cabinet of the State of Osun”.

The post You are a worthy successor, Aregbesola tells Oyetola appeared first on Vanguard News.

Islamic perspective of poverty and unemployment

By Imam Murtadha Gusau In the name of Allah, the Most Merciful, the Grantor of Mercy All perfect praise be to Allah, The Lord of the Worlds. I testify that there is none worthy of worship except Allah, and that Muhammad (Peace be upon him) is His servant and Messenger. […]